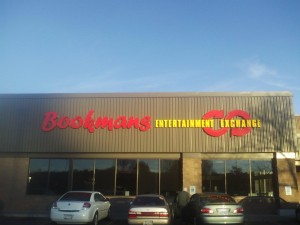 Have you read any good books lately?

Bookman’s Entertainment Exchange in Flagstaff provides a wide variety of books, magazines, movies, video games and music for your entertainment enjoyment.  The first Bookman’s opened in Tucson in 1976 after Bob Oldfather bought Livingston’s Used Bookstore and its inventory from his dad for $1.00.  Thirty five years later there are now seven Bookman stores making it the largest used bookstore in Arizona.  Over the years, they have added a coffee and pastry bar area with free internet.  This is what I enjoy most about Bookman’s – a place where I can relax, have a cup of coffee and read a book to see if I want to purchase it.  I also like the fact I can take my old books, cd’s, magazines and movies to them and exchange them for newer ones or ones that I have not read, listened to or seen.

In January of 2010, the third largest snowstorm hit Flagstaff and caved in the roof of Bookman’s.  There were about 200,000 items destroyed which was about 75% of the store’s inventory.  After taking about a year to rebuild, the store reopened with an amazing remodel.  The internet and coffee area became larger and noticeable upgrades were made throughout the store.

Today, Bookman’s Entertainment Exchange is a hub for people of all ages and walks of life to convene for entertainment, studying, group interaction and internet usage.  From mom’s with kids, to teenagers, to college students and retirees, Bookman’s has a book for everyone.  Bookman’s also has a Kid’s Club, discounts for teens and Project Educate for teachers and classrooms.

Bob the Bookman never realized the potential for what he had begun.  His website has him saying it this way:  “I would love to say I had this grand vision, that I knew it was going to be successful. But it was never about money. Ever. I just wanted a cool place for me to hang out.”

Next time you are wanting a good book to read or are wanting to get rid of some books on your shelves, consider going to Bookman’s Entertainment Exchange.  AND Remember that Team Tait sent you!

Posted in About Flagstaff.