“My name is William Lamar Grafton but everyone calls me Bill.”  This is the first sentence in Bill’s autobiography titled:  “Before and After General Patton”, copyright February 28, 2008.  He is an amazing man who loves America, baseball and apple pie! 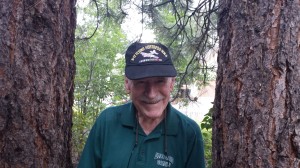 Bill was born at home in Meridian, Mississippi on November 11, 1924.  He was the 5th of 6 boys.  Since Bill was born on Armistice Day (Veteran’s Day), one of Bill’s brothers tried to convince his parents in naming him “Armistice”.  Bill is glad his parents did not listen to his brother and named him William, instead.

Bill remembers growing up on a 16 acre farm where life was carefree and full of adventure.  Life was good on the farm for Bill and his family.  He does not ever remember an evening meal where they did not have company.  It seemed like the other farm boys were always at their home.  When the Great Depression hit in 1929, Bill and his family had plenty to eat since they raised their own cows, pigs, chickens, and turkeys.  They also had a large garden, pecan trees and an orchard.  He said they fed not only their family but also their friends and neighbors at this time as well.

When Pearl Harbor was bombed on December 7, 1941 and war was declared by our President, Bill’s brothers began to sign up to serve in the Army Air Corp.  Bill had to wait a year before he could sign up because he was not old enough to follow four of his brothers into the war right away.  He had a hard time convincing his mother to let him be the fifth of her sons to sign up for the military but she finally agreed.  Fortunately, all five boys survived the war of all wars and came back home to her and their wives.

Bill trained to be a gunner in B-17 bombers.  They were dropping bombs over Hungary when they were attacked by German fighters.  His plane was hit, Bill parachuted out with the others and landed in Hungary where he and another fellow airman were turned over to the German police.  He spent time in a Hungarian prison and then was moved to a German concentration camp in Sagan, Germany.  In January 1945, the Russians were getting close to their camp so the Germans began to march them out of the camp to another location.  Bill remembers making a backpack out of a wool GI shirt with a needle and thread.  He said he put all his clothing on his body, found some woolen socks somehow and began to march in a foot of snow and howling wind in what was suspected to be 40 below weather.  They marched all that night and would stop for only minutes at a time when Bill would eat some Red Cross issued chocolate that he kept close to his body so it wouldn’t freeze and break his teeth.  A number of men froze to death.  He believes that the chocolate and the wool socks kept him able to march and kept him alive!  Bill was moved from camp to camp as the Americans or Russians would get closer and closer to their German occupied camps.  On April 29, 1945, General Patton liberated Bill’s final camp.  Bill was able to go home and start living again in freedom!

I hope you all get to meet Bill someday!  He has many stories to tell of an era that is quickly fading into the sunset.  He keeps telling me that he still feels as if he is 30.  Bill loves life and has a bucket list that would shame many of us.  He still wants to learn to play the piano, get his back into shape so he can hit the ski slopes some more and find the fountain of youth so he can live to be well over one hundred!  What a man and what a life!

Many thanks to men like Bill who have served America in the military all of our young 239 years this July 4, 2015!  We salute you Bill – and all of your fellow veterans who have fought and also those who continue to fight in our military to maintain our freedom!  We appreciate you all!

Brought to you by Team Tait by Jacki Tait’s assistant, Leslie Crawley.

Posted in People, Places to Learn.