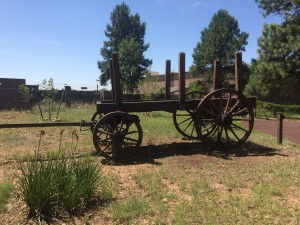 For a romantic like myself, I find the story of the Riordan brothers quite fascinating! The camaraderie of brothers plus the companionship of sisters intertwined into family marriages presents an intriguing combination!  The foursome was so close knit that they decided to build their homes into a very large duplex.  It is what we know today as the Flagstaff Riordan Mansion State Park in Flagstaff, AZ.

In the mid-1880’s, Timothy and Michael Riordan from Chicago, Illinois married Caroline and Elizabeth Metz from Cincinatti, Ohio.  It was not long before the foursome migrated south to Flagstaff, AZ to help the elder brother in the about to be booming timber business.  The eldest bought the lumber mill and eventually turned it over to his younger brothers in 1897.  Shortly after Timothy and Michael acquired the mill, it burned to the ground.  A much bigger and better mill was built and their Arizona Lumber and Timber Company began to thrive.  It eventually became the largest employer in all of Northern Arizona.

Because of the mill’s success, the Riordan’s became prominent in the development of Flagstaff and the surrounding areas.  In November of 1903, Timothy and Michael began construction on a home that complimented their community status.  Two separate houses were constructed.  A very large drawing room and common area they called “the cabin” connected the two houses into one very large mansion.  Each home or separate wing were 6,000 square feet each.  “The cabin” in the middle that brought the two families together was another 1,000 square feet of common area.  The mansion boasts of 40 rooms and over 13,000 square feet.  Timothy, Caroline and their family occupied the east wing while Michael, Elizabeth and their family took up residence in the west wing.  “The cabin” in the center of the mansion was used by both families for entertainment and recreation.  Charles Whittlesey, famous for crafting the El Tovar Hotel at the Grand Canyon, designed the Riordan Mansion for the families.

Today, the Riordan Mansion is an Arizona state historic park and can be viewed by guided tours only.  The mansion is commonly used for social events, such as weddings, dinner parties, family reunions and other community functions.  Visiting the mansion, one enters the home of another era.  When I am there, I enjoy imagining what it may have been like to have lived in this mansion with family connections so close with the ‘latest’ of amenities so readily at hand.

If you are ever in Flagstaff and have a free afternoon, make a visit to the Riordan family mansion on the top of your list.  It’s a great place to relive the past and to experience a Flagstaff historic site and home.

Posted in About Flagstaff, Museums.