One of the most historic places in Flagstaff, AZ is the old Weatherford Hotel at the corner of Leroux and Aspen in the downtown area. 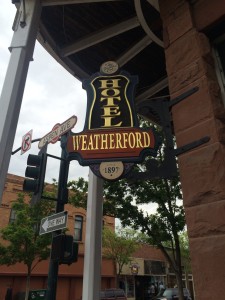 John W. Weatherford rode into town by horse and buggy in the late 1800’s with grand plans for arriving in the West.  In 1898, the original structure of the hotel was opened as a general store on the first floor and the Weatherford family living quarters on the second floor.  Not long afterward, the Weatherford Hotel had its grand opening on January 1, 1900, welcoming in the new century.  This new rendition added a third floor which now features *”the legendary Zane Grey bar,” ballroom and balcony.  John’s hotel was noted as a ‘civilized oasis’ for travelers making their way West.  It is also known that the Weatherford housed at various points in time, a theater, billiard hall, radio station, and different types of restaurants.

The Weatherford is also acclaimed for its entertaining of famous people.  President Theordore Roosevelt stayed in this established hotel as well as the publisher Randolf Hearst.  Zane Grey, a well-noted cowboy author, wrote his book ‘Call of the Canyon’ while residing at the Weatherford.  Artist, Thomas Moran, also took up residence at the hotel for periods of time to sketch western landscapes during the early years of the 1900’s.  His breathtaking pictures proved instrumental in persuading congress to preserve some of our natural wilderness areas.  Some of these areas are now Yellowstone and Grand Canyon National Parks.

Another famous tidbit about our Weatherford hotel is that it hosts the great “Pinecone Drop” every New Year’s Eve to celebrate when the clock strikes midnight and a ‘new year’ is ushered into existence!  A large manmade pinecone is stretched out over the intersection of Leroux and Aspen streets from the top floor of the Weatherford hotel.  At midnight it is dropped just like the New York City Time Square New Year’s Eve ball.  The “Flagstaff Pinecone Drop”celebrates two New Year’s events.  It is dropped at 10 p.m. to celebrate the ball being dropped in New York City.  Then it is raised and dropped a second time when the clock strikes midnight Arizona time.

The Weatherford Hotel is a time tested hotel that has *”survived fire, harsh weather, two world wars and a planned demolition”.  Today, this hotel is alive with entertainment!  They offer *”live music several nights of the week from 9 p.m. to 2 a.m.”.  Each floor of the hotel has its own bar.  In 1975, Henry and Pamela (sometimes referred to as ‘Sam’) Taylor purchased the Weatherford to guard it from being destroyed.  Rennovation continues today, and the Taylors hope to restore the Weatherford to the original  grandeur of its time.

The Taylors opened Charly’s Pub & Grill as part of the newer renovations.  Charly’s is a Flagstaff favorite for many locals, especially the downtown business owners and employees.  It is also one of the few places in town where a tourist who wants to experience southwestern Indian cuisine can find a rather large and sumptuous Navajo taco and great bowl of posole.  My personal favorite is the “Sweet Summertime” Salad with its yummy candied walnuts, dried cranberries, strawberries, feta cheese, mixed greens, chicken (can be added) and amazing balsamic vinaigrette.  Catering services are also offered for parties, wedding receptions and other desired gatherings using the many different rooms and venues to choose from at the Weatherford Hotel.

As their printed brochure clearly states:  “Nearly 100 years ago the local paper, The Coconino Sun, claimed the Weatherford to be ‘first class in every aspect.’ – A tradition and standard we will continue to uphold.”  If you are a tourist vacationing in Flagstaff or just passing through town, we hope you won’t miss this historic landmark when you come to visit and will enjoy the food at Charly’s Pub & Grill.  If are a local, maybe we will see you downtown at Charly’s or the Weatherford!

Don’t forget that Team Tait sent you – – A team ready to help you meet your real estate needs and dreams!

The asterisk * is for quotes from printed material provided by the Weatherford Hotel and Charly’s Pub & Grill.